Closeup on the Osprey

This is a common raptor in Florida, though apparently it’s part of the Imperiled Species Management Plan. I see their nests everywhere. That’s a good thing, because eagles like to grab the osprey’s young and eat them.

Several features distinguish the osprey from other birds of prey, including a reversible fourth toe and spines located on their feet that are used to help grasp their prey, which is almost always fish, as they fly over the water.  Osprey and owls are the only raptors whose outer toe is reversible. Ospreys in Florida did not suffer the serious pesticide-related population declines that occurred in other states in the 1950s and 1960s. They are also known as “fish hawks, “sea hawks,” and “river hawks.” Because of their diet, you’ll find them near bodies of water.

The juvenile osprey may be identified by buff fringes to the plumage of the upperparts and streaked feathers on the head. My photos indicate a young osprey, eyes newly yellow (the chicks have orange eyes).

The osprey is unusual in that it is a single living species that occurs nearly worldwide.

I spotted one sitting on a branch at the lake. Perfect! No leaves. Heh. Tree leaves have ruined more bird photos than I can remember. 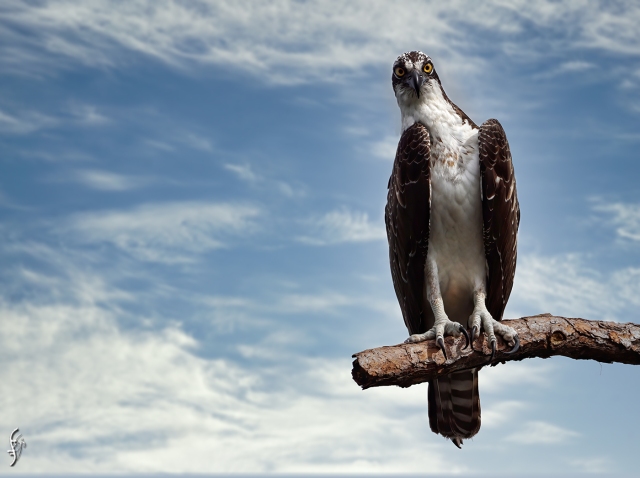 I cropped a couple of shots from the original photo so you can get up close and personal with this beautiful bird. 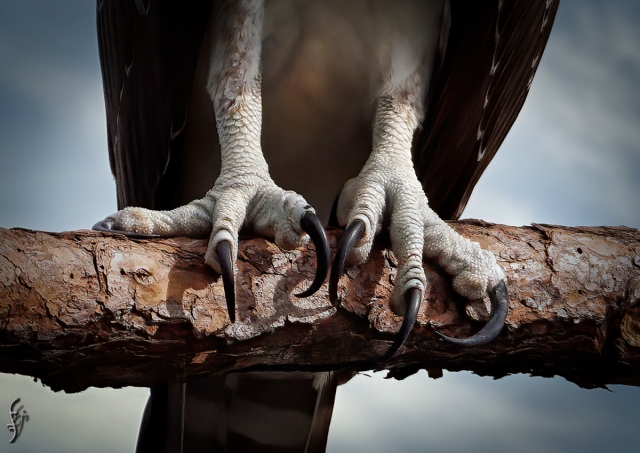 See you next time.

Fenraven happily lives in south Florida, where it is really hot most of the year. Find him on Twitter and Facebook by searching on 'fenraven'.
View all posts by Fenraven →
This entry was posted in photography, RL and tagged osprey, photography. Bookmark the permalink.

7 Responses to Closeup on the Osprey

This site uses Akismet to reduce spam. Learn how your comment data is processed.